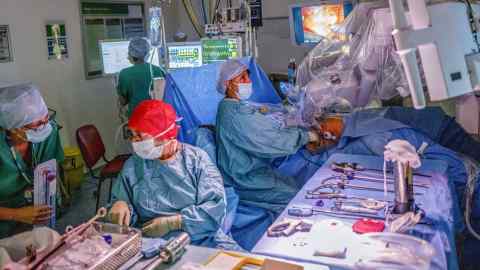 
Asian markets dipped Friday after a negative lead from Wall Street, with investors around the world worried about surging inflation.

Central banks in several major economies including the United States, Canada and Britain have already started raising interest rates to contain prices, but the European Central Bank on Thursday kept its stimulus plans and rates unchanged.

That sent the euro plunging to a near two-year low, but eurozone stocks were boosted while Wall Street retreated ahead of the Easter holidays.

The mood was subdued in Asia too, where only a handful of markets were open on Good Friday.

Analysts had expected China’s central bank to cut interest rates on Friday to provide support to the Covid-stricken economy.

But the People’s Bank of China left them unchanged.

“That is somewhat surprising given the sharp economic downturn and recent calls from China’s leadership for monetary support,” Julian Evans-Pritchard of Capital Economics said in a note.

“It underscores the reluctance of the central bank to aggressively ease policy. But we think it will have little choice but to do more before long.”

Russia’s invasion of Ukraine has added to the uncertainty about the global economic recovery from the Covid-19 pandemic.

This was reflected in statements from major banking executives in the United States, who described the American economy as solid but warned about the impact of the Ukraine conflict and the measures central banks such as the US Federal Reserve will take to control inflation.

“We do not think there is going to be a recession,” Julian Emanuel, chief equity strategist at Evercore ISI, told Bloomberg television.

“We do not think the Fed is going to break the glass. But the problem is investors aren’t in that mindset quite yet.”

European and US markets are closed on Friday.

Russia is a major global oil and gas supplier, and — along with Ukraine — is also a key player in the grain sector.

The conflict has shaken markets for these commodities, and the impact has been felt from the Middle East to South America.

In Yemen, there are fears of food shortages with the war-ravaged nation already on the edge of famine.

In Argentina, a strike by grain transporters has paralysed farming exports — haulers are unhappy with the rates they are paid, pointing to the spike in fuel prices because of the Ukraine crisis.

The war has sent oil prices soaring, with reports swirling about further energy sanctions on Russia. Both main contracts have hovered above the $100 per barrel mark in recent days.